John: OK, Todd, as I mentioned before, cost segregation's a pretty complicated area. Basically the idea is, and Todd will go into more detail on this, but basically the idea is that typically you buy a building, a commercial property, you're depreciating that over 39 years, and there's a lot of different items that go into that property.

We don't necessarily really need to depreciate those over 39 years. The thing is, if you're not going to do that you need back up to go up against the IRS to show that that cost segregation, that we can accelerate that depreciation, and end up with a much greater depreciation expense early which is going to save a lot of money in taxes. 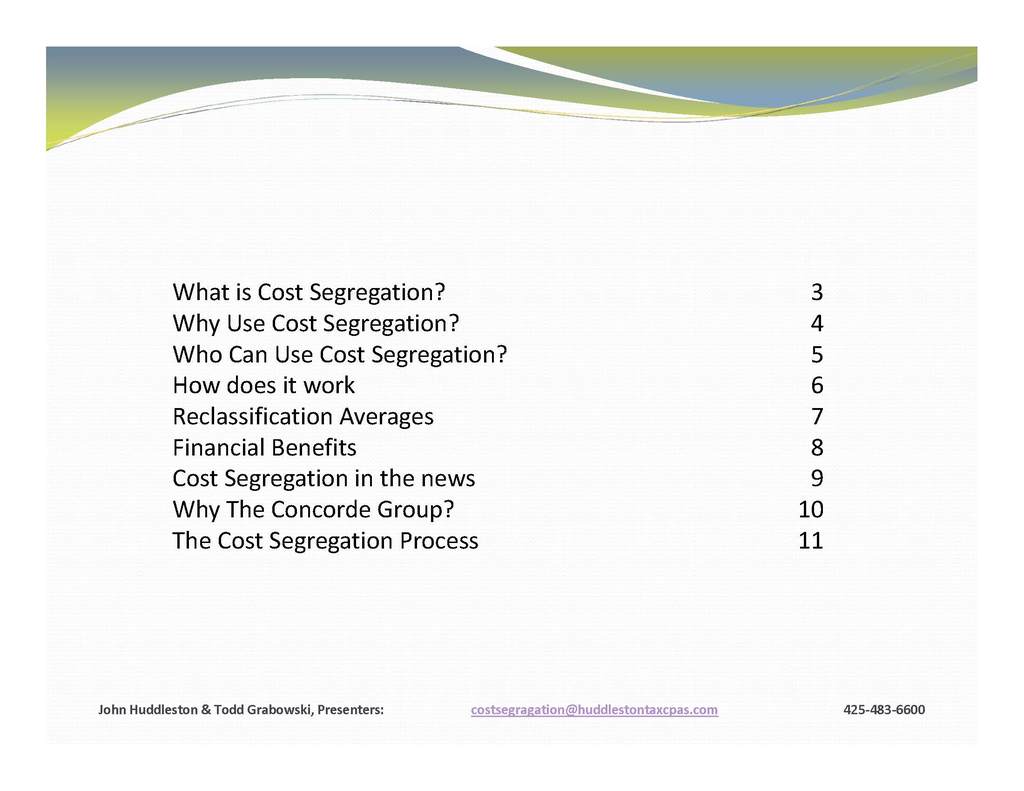 Todd: Now what is cost segregation? Cost segregation is an IRS tax strategy, where we're accelerating depreciation on an asset to reduce federal income tax liability and also improve cash flow. Just reading along here, it's comprehensive engineering based analysis that allocates specific building components to construction and acquisition costs. 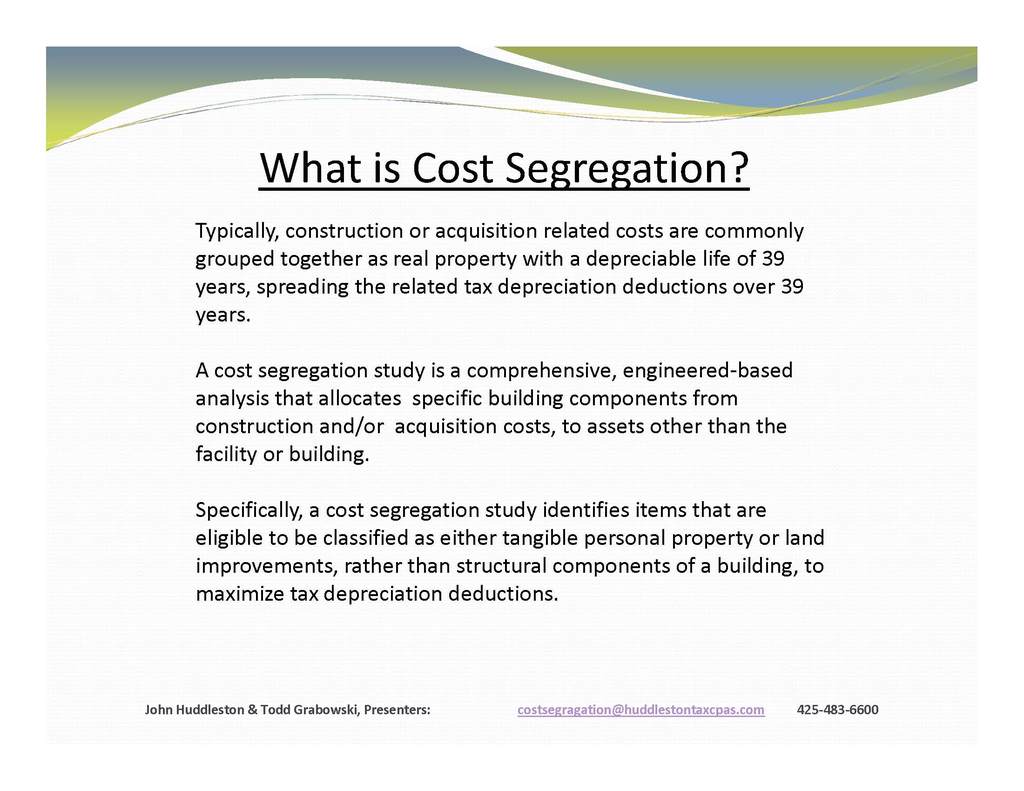 Again, it identifies items that are eligible to be classified as either tangible personal property, or land improvements. Land improvements being any type of landscaping, lighting, those types of things that might be on the outside of a building, and separating those from the structural components of a building. What this does, again, it maximizes the tax depreciation deductions so that clients can again, pay less federal income taxes and also improve cash flow markedly.

If anyone has any questions feel free to jump in, or if you want to post those on the chat I will keep my eye on that so I can answer any questions that come through as well.

Why use cost segregation? Essentially it gets down to the timing of the deductions and also the saving of federal income taxes and improving cash flows. The IRS in the code encourages tax payers to maximize their depreciation. That in and of itself if the main reason why clients should be using cost segregation. It's essentially the proper way to depreciate an asset.

Now, some people might say, 'I'll take these savings over the 39 years and just get the regular amount.' Well, that's similar, and I hear that a lot from our clients and our prospects and those types of individuals, even CPAs for that matter, it kind of gets back to the lottery theory if you will. If you win a $1 million, would you want a $1 million now or do you want 50,000 for 20 years? We also do free analysis, and this is something that I think is imperative with cost segregation studies. We do a free full analysis of properly identify what the savings will be, literally, almost down to the number within about 5% or so. It is a conservative estimate.

Now, why would you want to use cost segregation? Again, it's going to be a greater return in your investment on your property, improving cash flows and also reducing federal income taxes. The most savvy individuals have been using this for years. The real estate owners, people who are in the commercial real estate business for a living, if you will, have been doing this for years. It's a great way to improve that cash flow and buy new properties for that matter, or things of that nature.

Very, very good, very savvy tax strategy that many people do not know about. I run into CPAs all that time that don't have a lot of experience with it or have never heard of it. The reason being behind that is there's not a lot of companies that can do this, and really for the middle market, there's not a lot of firms that will do studies for your $2 million building.

Speaking from experience, I know a lot of the large accounting firms, such as Deloitte, where I was at, wouldn't touch a study for under 20 or $30,000 in fees. That really puts the one or $2 million or $3 million type of building out of reach so to speak, just because the value's not going to be there for them.

Part of the reason we started our firm was because we realized we could serve this market, again the $1 million $2 million, $3 million, $4 million, $5 million, what have you, that no one was serving before. Part of what we do on a daily basis and with our sales group is to educate and let CPAs know we are a source for you to save your clients significant tax dollars.

John: It's like an interest free loan, right, Todd?

Todd: That's exactly what it is. I tell people all the time, especially owners that have never heard of this, you're over paying on your taxes. People kind of hate of hear that when you tell them that, but at the same time it's something where, essentially you are. If you're not increasing your deductions or maximizing your deductions, you're not really looking out for yourself as much as you probably should be.

John: It's probably also something that could be used prior to the purchase of a building in determining your return on investment. If you've got an interest free loan like that, it's going to complete change the ROI of that investment, right?

Todd: That is true, absolutely. Now, part of the beauty of cost segregation, and this a misconception as well, is that you're allowed to get catch-up depreciation. What we call catch up depreciation would be the missed depreciation from the asset was placed in service. Let me give you an example here.