Why and How Small Businesses Should Be Doing SEO 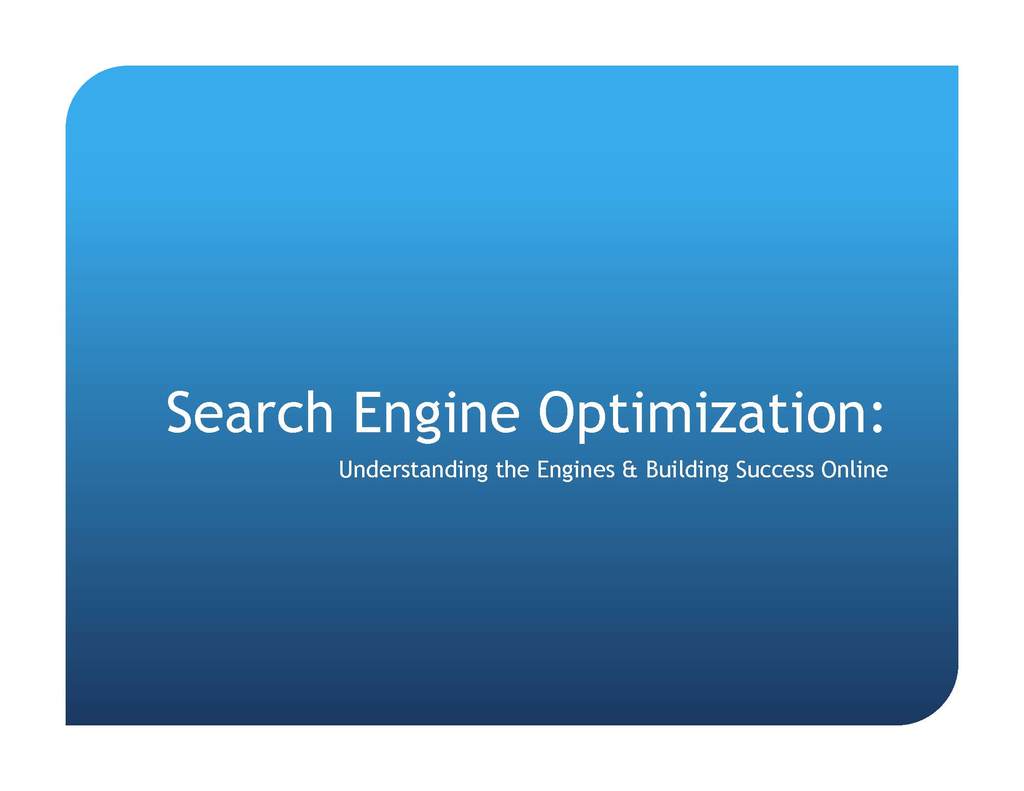 I'll get started and just go over some of the basics. I try to be fairly high level. Some of this stuff may be a bit complex. I've left some time at the end to ask questions and my hope is that you can come away with this and understand a bit better around things you can do to drive traffic to your site. So a few things that I wanted to cover today was just the search landscape and give you a better idea of what's going on with the search engines and how things are working to really, how people are actually getting in front of businesses in this day and age. How the search engines work. What you can do to make your site more likely to be found by the search engines.

How you would go about finding the right type of key words that would be relevant to your business and drive the right kind of traffic to your site and then just some strategies around link building which is a big factor in actually driving free traffic from the search engines to your sites.

Search marketing landscapes. What I mentioned at the beginning of this presentation is there's two different types of searches. There's the paid searches and the organic searches. What I've found from all the time I've been doing online marketing is that there's a lot of emphasis on paid search. People are spending literally tens of thousands of dollars every month trying to buy keywords for people to get in front of. 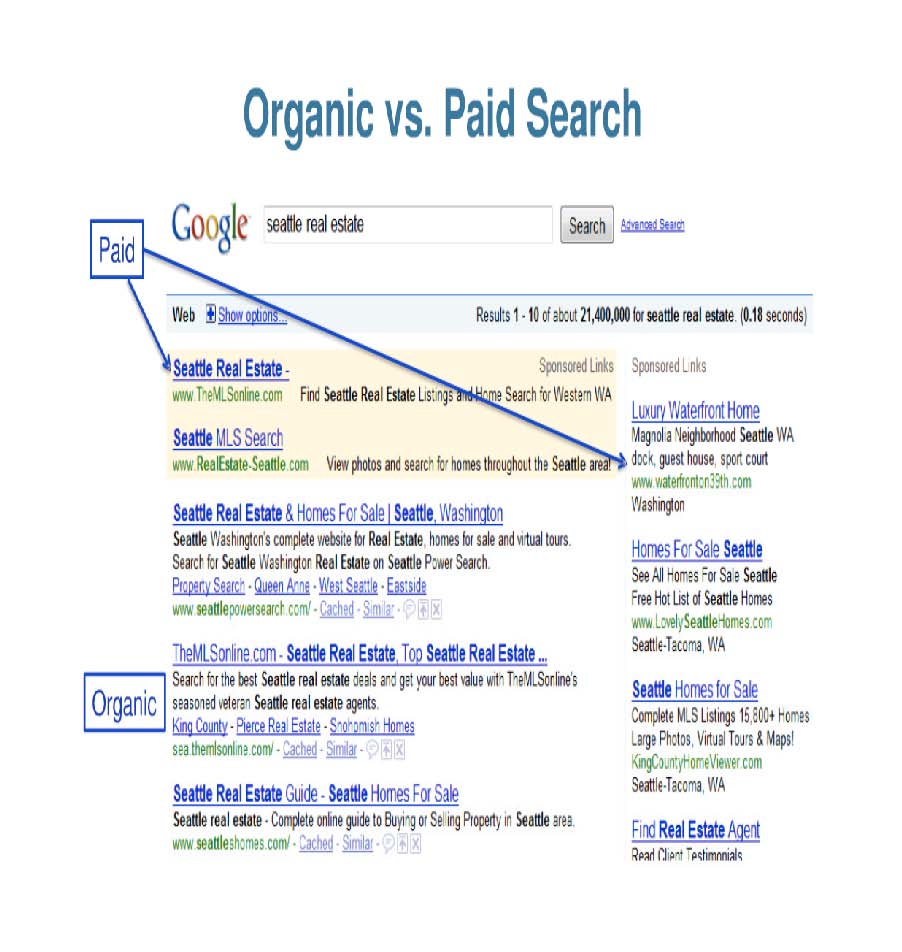 There's much less emphasis on the organic side, which obviously does a couple of things. It serves as having a lot of potential because there's probably a lot of your competitors that are ignoring that field, and at the same time it gives you the opportunity to spend time building up natural search listings that are going to stay there and going to make the search engines consistently drive traffic to your site without having to pay for every single click that's going to your site.

So I think that's a big benefit over the organic type of search marketing versus the paid type where you have to buy every single click that's coming through to your site. So that the effort you put into it, you never are gaining to the point where you could potentially be saving yourself money over the long term. Even though it may take some time up front.

Here's some things that a lot of people also tend to ignore is the fact that while there's so much money being spent on the paid side, only about 10 percent of all clicks are being driven by the actual sponsored links. While 90 percent of clicks are being driven by the actual organic side. So that's even more of a base line to be judging the types of time and energy and costs you're spending to actually be the smart thing to do search engines and I feel like we're getting to the model now where it's getting harder and harder to ignore the organic searches versus just trying to buy clicks going to your site. 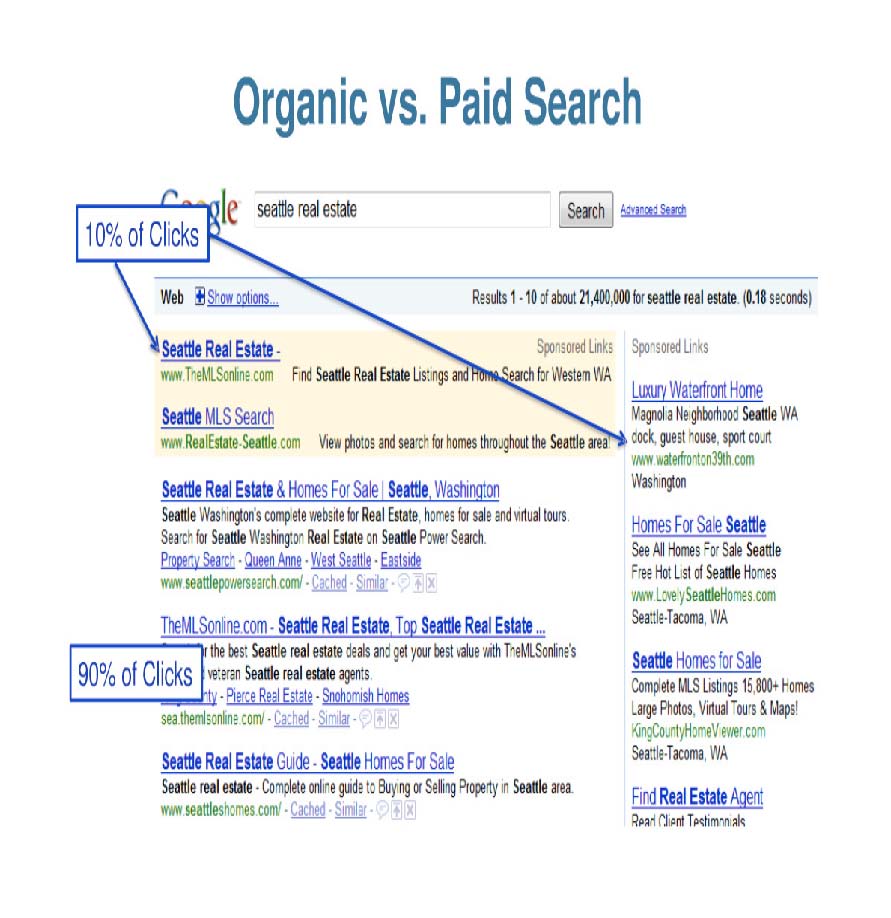 To give you some ideas around how the different positions are affecting the amount of traffic being driven to your site, you can take a look here and see just the breakdown of how much traffic is actually occurring at each position. As you can see, if you get to the number one position at Google, 42 percent of most of the clicks being driven by the search engine will be going to your site specifically. 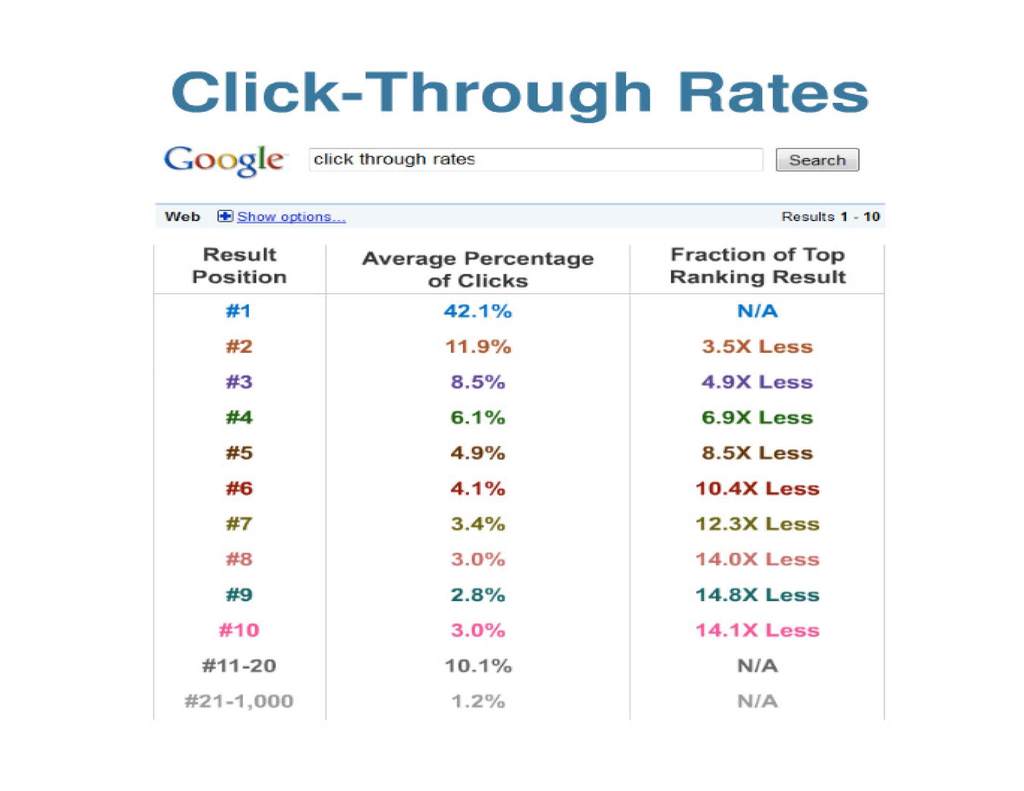 If you drop down to number two position, you are dropping all the way down to about the 12 percent of clicks. So this speaks to how important it is, and how much of a difference it can make by actually getting to the number one position versus the number three or four position.

That's why from my perspective, a lot of times, I've recommended that you focus on a few strategic keywords that have high potential and really try to get them to the number one or number two position versus focusing on a dozen or two dozen keywords and just hoping to get them all on the first page.

I think that over all the traffic can be a big difference if you are able to get into the top three positions, versus just on the first page and so this slide is just designed to speak to that a bit and show you the differences that each position can make on your actual traffic.